Mica is One Year Old!

Hard to believe it’s been a year! 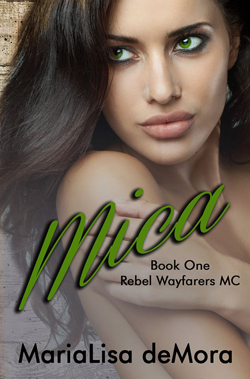 It all began with a dream. In late 2013, I began to dream about this sassy but fun chick, waking up every morning with an idea beating at my brain. The potential for a story, it was about a strong woman who had all kinds of shit thrown at her, but made her own way in spite of it all.

For the longest time, I didn’t do anything with the ideas I had in my head. But she was relentless, and just kept coming back in my dreams, eventually bringing other folks with her. I began seeing the other people in her life, found a hero…found a villain. I wrote an outline, put it aside. Did not stop dreaming. Just at the turn of the year, I began to write, pouring the story onto the page, words and phrases coming so fast I couldn’t type fast enough. When I tried to read the manuscript, entire sections of dialog and sentences would be missing because my fingers hadn’t been able to keep time with my brain. Wrote some more. Did not stop dreaming.

I went to a Buckcherry concert, did the VIP route, chatted with the boys for a bit. Stevie D said something to me that resonated, but not in a good way. When I told him it was the first time I’d seen them live, he said, “First time caller, huh?”

That shit stung. I’d become aware a few months earlier that my life had narrowed, and I was actively working to expand my horizons again. See, I have panic disorder, and it had begun to impact my everyday life. So I did shit like go to concerts at carefully vetted venues, where all escape routes were pre-plotted out, where I’d met the staff so I’d have a friendly face. I was not a “first time caller.” At least I didn’t want to be. I was taking steps to ensure I wouldn’t be.

I looked at other areas of my life. Found maybe he was right. There was that chick I dreamed of, after all.

So I moved forward with the book, researched and engaged an editing service, had friends and family read it, found a cover artist.

Then on June 22, 2014, I verified the document uploaded into Amazon was the correct version for the hundred-thousandth time, and hit “Publish.” The Rebel Wayfarers MC family was in the public realm, for anyone to see.

Now, here we are, one year later. and I’m about to hit “Publish” on the fifth book in the series, and have two more for release in the fall. Crazy shit. Crazier still that people read what I wrote, and liked it.

Don’t get me wrong, I like that you like it, just seems surreal to me that you want to read this stuff I pull out of my head…my dreams. I like to think I’m no longer a “first time caller,” at least in the areas of my life where it matters.

Go to Facebook and like my page. Then leave a comment on the giveaway post and tag THREE of your friends. You can enter unlimited times, and a random winner will be selected on 6/23. This giveaway is open internationally. Good luck … and thanks. Seriously, thank you. If it wasn’t for you buying and loving that first story, I bet I’d be keeping all this gooey goodness to myself.