When I wrote Mica, the very first book in the Rebel Wayfarers MC series, I used a variety of visual cues to keep me on track with the characters flowing from my fingers onto the page. One of the tools was to collect images of actors and models that I used to prompt nuggets of physical characteristic description. There was one image in particular that I used for Davis Mason, President of our fictitious motorcycle club. You can see the picture on my Character Inspiration Pinterest board.

Later, I became curious about the man behind the image. It took me several months, but I finally located who he was in real life, and also found a wealth of information. Meet Kyle Turley, a phenomenal man who happens to be a former college and professional football player. He spent ten years in the NFL, much of that time with the New Orleans Saints. Kyle now is a country music recording artist and using his fame, has developed a powerful platform to debate and educate about the effects of concussions in the post-career health of NFL players. Among his other efforts, he’s testified to Congress about the issues. 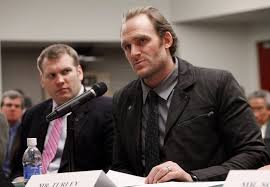 I located a contact email on his record label website, and then stared at the screen, thinking about it for nearly three whole seconds before I sent an inquiry email.

In essence, I asked if he modeled professionally and if he would consider working with me for an image I could use to promote the book and series. I included a wee bit of gushery in the email, “A picture was the inspiration for this character, and it’s taken me months of searching to find out that it was you!”

Imagine my surprise when I received a warm, positively worded email back from the president of Gridiron Records, asking for more information. Over the next few weeks, we sorted through a variety of images they had from a photoshoot and settled on the picture you see on the front cover of Mason. I have to say, Kyle definitely embodies my Davis Mason. Here’s my raw, first reaction to the image:

That one. Wow. How much!

Seriously, as long as that image hasn’t been released or distributed in the past, it would be perfect for what I’m needing. It presents the character as isolated, caught in an intimate, personal moment, tension evident in his posture and the way the muscles tense in his arms, across his shoulders. His face is partially obscured, and his left arm is hidden (the character has a distinctive tattoo, so that’s good!) There’s ample environment to use for verbiage, etc. Wow.

But, the tale of this cover doesn’t stop there!

Back before I went looking for Kyle, I began searching for an image of a hot, sexy, powerful-looking motorcycle to use. I know how powerful cover images can be, how they can turn on or off a potential reader, and how critical they can be for a series. Because, by the time we got to Mason’s book, I felt the fans of the series would have created an image of him in their head, I really didn’t want to turn anyone off by using the wrong model. I felt selecting an image of a powerful machine to represent the character could work.

It’s another case where asking gets you a long way towards what you want. It’s like Nora Roberts said, “If you don’t ask, the answer is always no.”

I found some motorcycle pictures I adored in a photographer’s gallery on Facebook, followed the links to his website and found a few more. The lighting was exquisite, the staging impeccable, the presentation of the mechanical beast is awe inspiring. Yes, just yes, please God. Without hesitation, I emailed him. Simply reached out to see if I could purchase rights to one of the images.

That photographer is Frank Bott, folks. And, guess what? Turns out he’s a super famous photographer of hot cars and motorcycles and his work has been published in magazines, newspapers, and books all over! ‘In demand’ doesn’t begin to explain how busy the man is. Editors write articles about him and his work in motorcycle enthusiast and technology magazines. 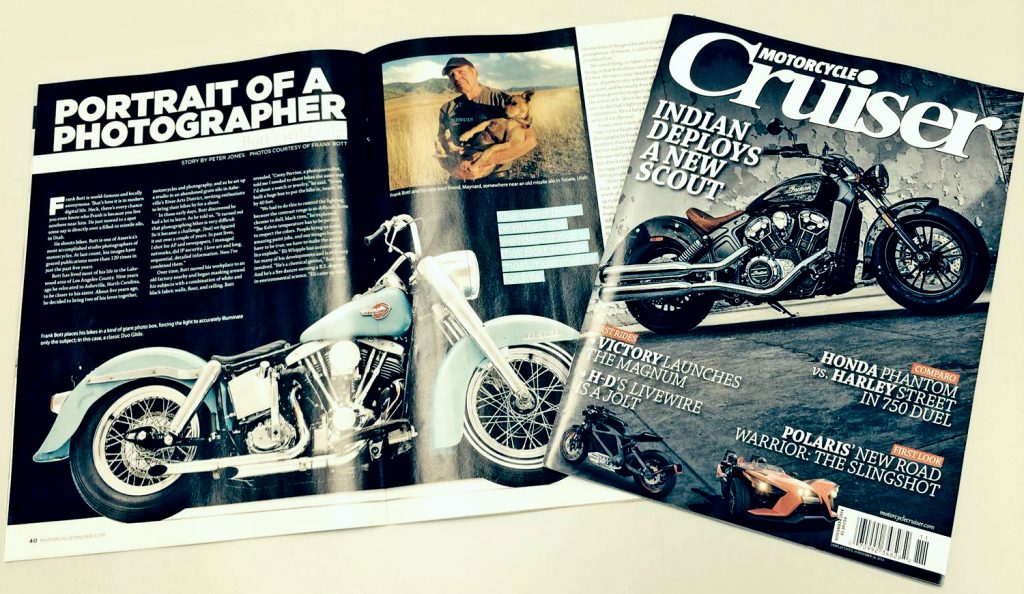 Wanna bet on my chances of working with this phenomenally talented and artistic photographer? If you guessed anything less than 100%, you’d be flat wrong! Against all odds, Frank responded to my email with nearly 30 possible image recommendations, and we set upon a dialog via both email and phone that landed me some seriously hot pictures of a super-rare motorcycle.

The bike, a Vincent Black Shadow handmade in England in the 1940s, plays a part in the stories, as I suspect you already know. Work on the restoration of the bike helps heal Gunny, pulling him out of his PTSD shell at a time when he needed it most. Events around the presentation of the bike as a gift from Gunny to Mason helps cement Jase’s position in the club. Then, of course, there’s the fact that Mason deeply appreciates the powerful bike, a fitting symbol in every way for the powerfully alpha man we’ve come to love.

For me, one of the images that I licensed from Frank quickly became synonymous with the book series. Shown bottom-left below, this shot of the Vincent appears on nearly every promotional image, as well as the back of Mason’s cover. 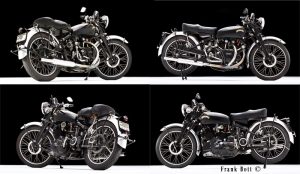 So that’s the story behind this cover. I hope reading about the path taken to get here provides all of you as much pleasure as it has given me. I have faith that these inspirations behind the characters and parts of this narrative will help the story ring true.

Without further ado, here is the cover for Mason. I love it! 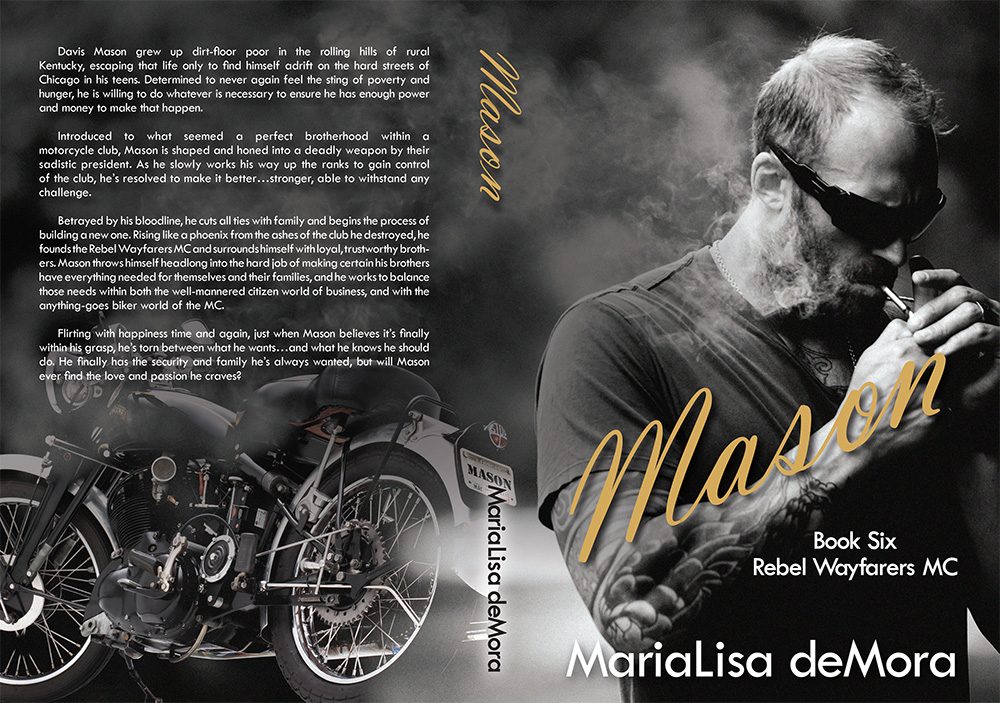