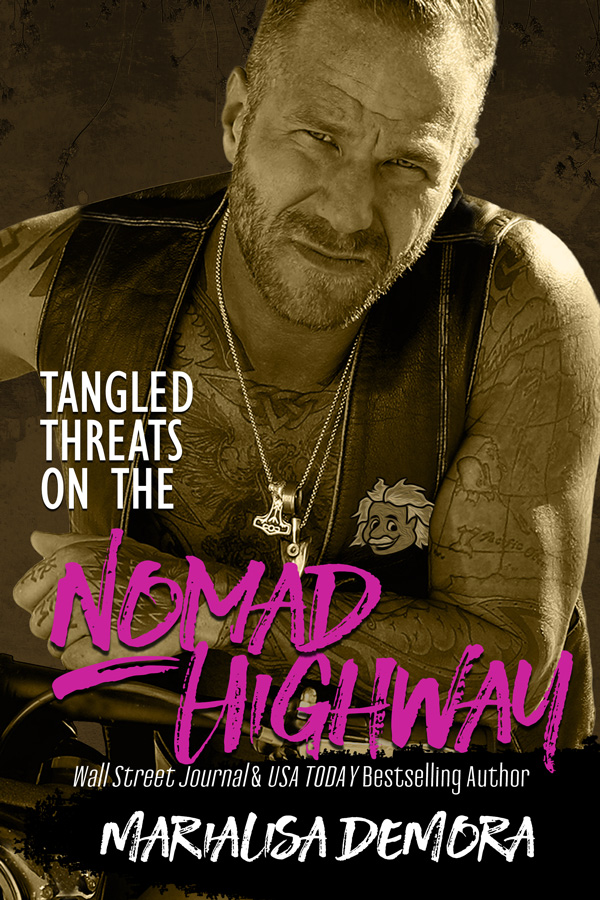 Tangled Threats on the Nomad Highway

Neither This Nor That MC, Book Six

Einstein didn’t allow himself to believe in fate. Wouldn’t give it a moment of consideration because if he thinks for a single instant there are wizened crones tugging at the fabric of his existence, he’ll have to locate them and deal back the hand they sent his way. He believes his wife and daughter deserve more than that. Fate has nothing to do with the holes in his heart and life. No, those are due entirely to a world he tries to keep in his past. Tries and fails, and now all he has is cold granite to embrace.

As the only nomad for the Bama Bastards MC, he takes pride in policing all potential threats to the club that’s become his home and family. This includes trespassing shadows from his past.

Mariam Threadgill still isn’t used to her new life. After resigning herself to a reality as a broken prisoner in her childhood home, liberation had come in the form of unconventional champions: Rough and tumble bikers who proved to her how deceiving appearances could be. Through the months following her rescue, she’s developed a strong sense of loyalty to the men who wear black leather and ride steel steeds. She’s vowed to herself to defend them against all comers, even those who shouldn’t be a threat.

As danger once again darkens her world, Mariam is thrust into an unfamiliar role. She’s never seen herself as anything other than an underdog, until Einstein demands so much more.

Mica sat on her back porch watching the squirrels chasing each other up and down the many trees available for their aerobatic antics. In her favorite jeans and thermal shirt, she had her feet propped up on the fire pit. A modest fire kept the chill of the late spring evening away, and her ebook reader would let her read past sundown.

Picking up her tumbler of clear liquid, she gauged the amount of tequila she’d had to drink so far, and thought it might not be quite enough yet. Grinning at herself, she sipped and picked up her reader, flipping pages with her thumb until she was back at the beginning of the current chapter. She hated starting in the middle of things, and if it meant she had to re-read a few pages, it was worth it for the story’s continuity.

Michael was sitting in the house watching TV; he’d been staying in almost all the time since he came to stay with her several months ago. She occasionally got him out to Jackson’s, but he really was trying for peace in his head, and drinking fuzzied that peace.

Shifting her legs, she rolled her head against the back of the chair, thinking back to bringing him here from the airport. Mason had been so good to her and helpful that day. She grinned as she remembered Michael’s mistake, thinking Mason was her boyfriend. The look on Mason’s face was priceless, and she’d quickly stepped into the gap to explain they were just neighbors.

It had been interesting getting to know her twin again; they’d been apart for so long. Even before they weren’t able see each other physically, they’d been emotionally apart forever. Michael was thrilled she’d gone on and graduated college, and she showed him pictures of her commencement ceremony.

He asked her if it was awkward not having any family at the ceremony; you could always trust Michael to dig to the quick when he thought he saw a wound. Smiling, she told him about the group of strangers who stood cheering and whistling for her, and how it had made her day. She mused that it was probably an alumni group that found out which students didn’t have any reserved seats for family. It seemed like something nice to do for graduates, and she had appreciated it. That was also the first time she’d gone into Jackson’s bar, which was another really great memory, and a good portion of the reason it was her favorite hangout.

Lifting her head, she listened and recognized the sound that was getting louder; Mason’s bike was headed down the street. It was still too chilly to ride much, but he got it out every day that offered sunshine. Laying her head back down, she looked up at the stars she could see through the early leaves of the trees. Work was good; they’d signed a couple of new clients, and she thought things might get busy enough to hire another developer. She and Jess could do lots, but each project deserved a certain level of focus that they were having difficulty providing anymore. She knew it was only a matter of time before there was too much work for the two of them.

Taking note first of the throaty, rumbling roar of the bike, and then the quiet as it was shut off, she closed her eyes, listening to see if Mason would come over and sit by the fire. It had become a kind of comfortable ritual; if she was already outside when he got home, he’d first grab a beer from his garage and come sit with her—no pressure to talk, just sharing space—but talking was okay, if they wanted to and had something to share from their day.

There. She heard his even stride coming towards her, confident and surefooted, even in the deep dusk fading to darkness. “Hey there, neighbor,” she offered, tilting her head to look up at him.

“Babe,” came the expected single-word response, which triggered a wide grin from her. Looking at her as he dropped into his usual chair, he asked, “Was your day good?”

Sighing, Mica said, “Best part of my day is right here—sitting right here, right now.” When she heard the intake of breath, she realized he might think she was talking about him. Smiling again, she thought to herself, Let him, because it wasn’t entirely wrong.