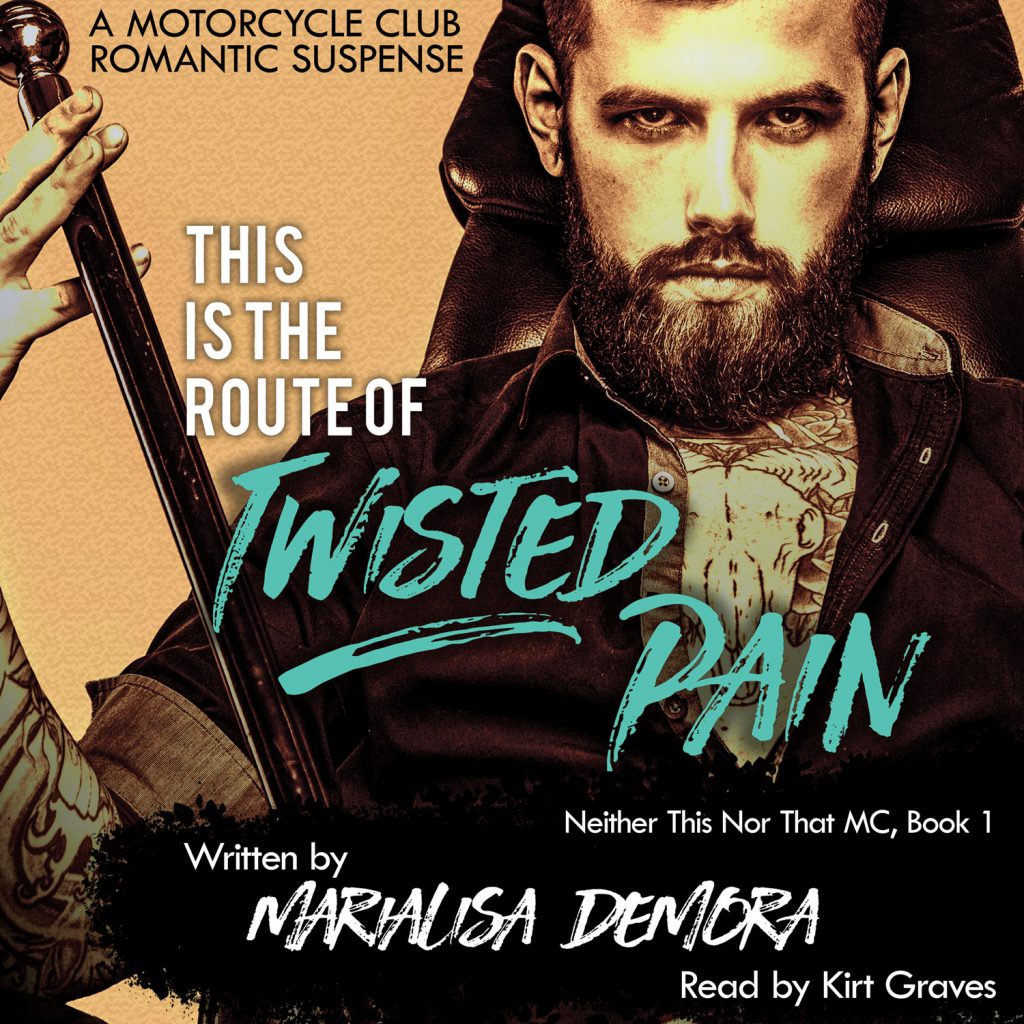 This Is The Route Of Twisted Pain

Neither This Nor That MC, Book One

Legends are born from moments like these. Folktales spun around a single point in time so perfect, you can almost hear the click resonating through the universe as things align.

George Bell, aka Twisted, knows the odds are against him. Have been all his life. Born in a Louisiana bordello, raised around the rough and rowdy men of a motorcycle club, he’s never been the lucky type. But he believes luck can change, so when fate gives him a glimpse of breathtaking beauty, he’s more than willing to roll the dice. Chancing upon what could be the woman of his dreams, he’s prepared to push this streak as far as he can.

Penny Dane’s background gives her an edge in the life she’s chosen to lead. Raised in a can-do family, she’s resilient, rolling with life’s punches and landing on her feet. But, when the past holds painful secrets—when a single misstep can turn deadly—can she trust the passion this man stirs in her?

On the surface, Bell and Penny don’t work. Their mismatched worlds are too different. But like a backwater bayou, what you see is not the whole story, there are mysteries buried underneath. Penny is the red-haired beauty caught up in a web of lies. Bell is like no one she’s ever met before. The problem is, he knows it.

“This is the Route of Twisted Pain is an exhilarating, gripping romance novel contrived of incredible world building, complex yet relatable characters, and a unique, captivating plot.

Readers will be up all night with this riveting page-turner.” – NY Literary Magazine

There’s been a tale rattling around in my head for a while now, ever since I penned Twisted Penny, a short story for the OAMC anthology. George Bell, aka Twisted, has been all up in my face, demanding he get more page time, so what else could I do? I’m giving it to him.

Set deep in the bayous and canals of southern Louisiana, this is turning into a full length novel, and I’m excited to see what y’all are gonna think about Twisted and his petite redhead, Penny Dane. Their’s is not a typical love story, and so full of turns it will be interesting to see how it all winds up.

In the story, Penny has occasion to make oyster po’boy sandwiches for Twisted and a couple of men (thanks for the idea, Kelsi). Here’s her recipe, which happens to be one I’ve used many times:

What you need to buy

Make your own tartar sauce

“Three ball, corner pocket.” His muttered words were accompanied with a thrusting gesture of the pool stick, indicating the particular corner out of four at which he was aiming. Simple shot from where he stood, a straight lineup with the pocket. He just needed to pop a little lower right-hand English on the cue to pull it back to where he wanted so he could position for the next shot. Spin to win, folks. He straightened and took a step back, which rapidly turned into two additional half-steps before he righted himself, killing the stumble’s momentum. Well, it should be a simple shot, he thought, tongue in the corner of his mouth as he tried to recover gracefully.

Undrunk would equal simple. Drunk as he was right now? Not a fucking chance in hell he would be hitting that hole. His gaze crossed the two identically-dressed girls sitting on stools along the wall, tight tanks pulled low, shorts sagging around their hips, crimson lips. Or any holes. He squinted, the two women resolving into a single female form, wreathed in cigarette smoke. Or any hole, singular, he thought. Not that I’m lookin’ for skank, but pussy is pussy.

Wrapping his hand around the edge of the corner closest to him, he bent and angled himself into position, bringing the stick down and resting it on his hand in the notch formed by his jutting thumb. Hold on. Stroking back once…twice…then forwards with a soft crack. The tip hit the white ball, careening it into the red ball, and he watched as both moved exactly how he saw in his mind. Before the solid had finished falling into the netting, he called the next shot, striking the cue with the stick again just as it drifted to a stop. Shifting a half-step to his left, he called the next shot. And the next.

Surprisingly, he won, and that game turned into another. And another, which he also won, the wooziness slowly fading.

“A man drunk as you are, how in the hell does he still win at pool?” Bills thrown on the tabletop were a contemptuous insult, but he didn’t care tonight. Right now those bills were a tank of fuel, good meal, and hot shower. A haven purchased by a little overlooking was still a haven. It wasn’t that money was a problem, just that his self-righteous little brother didn’t want dirty money. He didn’t know him well, but suspected that to Fred, earned would be acceptable, and it’d feel good to offer something to ease an unspoken burden. I’ll just have to convince him that hustlin’ pool is work.

Leaning crookedly, he put his stick on the table for the next player. Pretend to be a little slow, promise ‘em a chance at recovery, he heard in his head and felt the grin falter on his face. That was a blast from the past he didn’t need. Papaw, go back to sleep, he thought, shoving down memories of bullet-riddled bodies falling around him, holes appearing in leather vests like movieland stunt props, but these had blood and bone, breathing souls behind them. Everything that mattered stripped away in a moment. Some lost to family crypts, some to a rift nearly as final. This trip the first accepted overture in over a decade of attempts, giving him renewed hope of restored connections.

“No freakin’ idea, man.” His mouth moved without his request, but at least it had the right idea. “Same time, same place tomorrow? You can win it back?” He wouldn’t still be in town tomorrow. Not a chance in hell he would still have the money, so there wouldn’t ever be a rematch. Fred’s load was supposed to deliver in the morning, so they’d be out of here by six o’clock at the latest. As he scraped the cash together, pushing the thick fistful deep into his pants pocket, he glanced around and noticed the woman was gone, having escaped the stench of the smoke-filled atmosphere. Prolly already walkin’ the lot.

Hand to his head, partly to hold the pounding thing together, partly to obscure his face, he made his way to the door. The giants standing there gradually resolved down into a single figure, and he was glad. Hard enough to bullshit this one, no need to ask for trouble by bullshitting two of ‘em. “Fred,” said the man in the blue shirt, white patch with black letters spelling out ‘Paulie’ over the pocket. “No.” Which he knew was giant-speak for ‘I can’t let you on the road like this. If troopers pull you over, it’s my ass in trouble.’

Startled at the name the bouncer handed him, he wondered, Was Fred who I said? Responding smoothly, he shook his head, saying, “Paulie, my man. I’m not drivin’. Partner is behind the wheel next shift. I’m just sleepin’.” Giving up with a grunt and a lifted chin, Paulie reached out and opened the door for him, seeming to know the effort would have been beyond him at this point. “Thanks,” he muttered, getting a second chin lift.

And as easily as that, he walked out of the bar masquerading as a truck stop and into the lot, the occupants never knowing who they had hosted tonight.