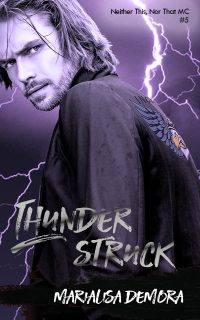 He might not have set out to be a leader in his club, but when the role is thrust upon him, Wildman shows everyone he’s more than ready for the challenge.

Wildman learned a long time ago it wasn’t healthy for a man to trust. Trust led to a false confidence, and that could get a body killed. Only the mercy he’d earned would determine if that ending came quick, or slow. Brothers and the brotherhood of the club were his only allies.

Originally published in the dark Christmas anthology, O Come, All Ye Sinners:
On the Fifth day of Christmas, MariaLisa deMora gave to me…
One plea for mercy
Two bodies writhing
Three clues to find her
Four reasons to love him
Five allies to save her
And a man determined to get his life back…